Discussion Positive thinking and realistic expectations for civil organisations in Bulgaria in times of global economical crisis, Sofia, 17 February 2009
20.02.2009
-A A + 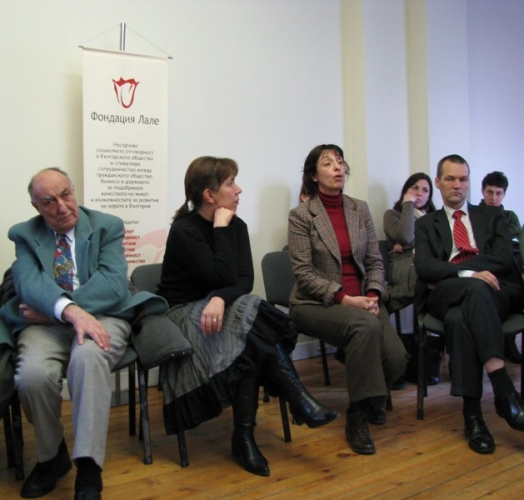 More than 50 participants from various civil society organisations from around Bulgaria have discussed the objective difficulties, challenges and opportunities which the NGO sector in Bulgaria is facing at the moment. Representatives of Tulip Foundation, Bulgarian Donors Forum, Bulgarian Charities Aid Foundation, Open Society Institute, American Foundation for Bulgaria, “We Exist Too” Foundation, Workshop for Civic Initiative Foundation, Chitalishte “Louis Brail”, Burgas Regional Roma Union, Youth Informational Consultative Centre Varna, etc. took active part in the discussion. Mr. Martijn Elgersma, Deputy Head of the Mission of Embassy of the Kingdom of the Netherlands was a special guest.

Opinions about the social environment and the public attitudes towards NGOs as well as views about the lack of communication among organisations were shared by the participants. Examples of negative practices in fundraising and corruption in the process of funds allocation were touched upon during the discussion. The participants also debated issues such as blurring the line between donations and distribution of public funds; corporate responsibility as a solid social commitment; mixing donations for charities with personal interests and other issues that represent barriers for effective giving and development of the NGO sector in Bulgaria.

During the discussion, it become clear that unlike for some EU member states and North American countries the financial crisis does not represent seriousproblemsfor the civil society in Bulgaria as individual and company donations are a small part of their funding. Wide spread practices of individual donations and big national donor organisations are practically non-existent in Bulgaria; apart from this fact, the government has not taken any measures for additional financial support for organisations working with the groups most affected by the crises.

The event was organised as part of the project Development of Social Transformation through Stimulation of the Social Responsibility, implemented with the financial support of the MATRA Programme of the Ministry of Foreign Affairs of the Kingdom of the Netherlands.