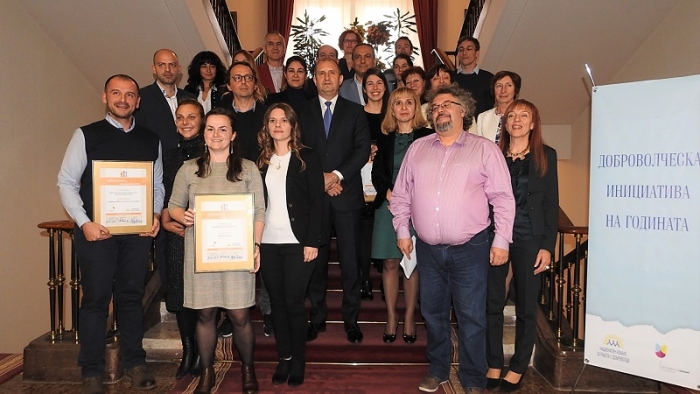 The Volunteer Initiative Awards 2019 were announced at a public ceremony at The Presidency on 6 December.

The President of the Republic of Bulgaria Rumen Radev hosted the event. He opened the ceremony by thanking all volunteers for sharing their time to support others by saying „ A society is strong when every member realizes that one has to act in a way that everyone feels better. I am very encouraged by the fact that more and more young people are attracted in these initiatives. That means that the future of Bulgaria is in the hanks of good, honorable and goodhearted, inspired people“.

Reneta Veneva, chair of the Board of NAVA, spoke about the competition and the variety of initiatives. Maria Petkova from Tulip Foundation shared that volunteering exists in all cultures, languages and religions for centuries. It is a fundamental form of democracy as volunteers demonstrate with their activities in what sociality they want to live.

By tradition, the members of the Jury announced the awards. Diana Kovacheva, Ombudsman of the Republic of Bulgaria, announced the mentor Programme “Pink spectacles” of the Social Tea House in Varna. The programme supports young people from social institutions, poor neighborhoods or environment of violence.

Manol Peikov from Janet 45 Publishing Complex presented Multi Culti City Garden of Multi Culti Group. The initiative brings in an open free place people from Sofia, foreigners, refugees, who together create multicultural garden in the centre of Sofia. It is a space for meetings between Bulgarians and foreigners enabling the process of integration by shared growing of plants and herbs form around the world and various community and cultural events. A group of volunteers received the award and told about their motives and participation.

Alexey Lazarov, Chief Editor of Capital newspaper, invite the volunteers from the Youth Mentor Programme of Experian Bulgaria to present their initiative by themselves. They are involved as volunteer mentors in providing support to young people at risk, without families, who live in observed housing on the way to independent living.

Tulip Foundation and the National Alliance for Voluntary Action organise the competition since 2011 with the aim to tell about voluntary initiatives and praise the thousands of volunteers in Bulgaria. This year 49 initiatives were nominated – a huge variety of activities in education, culture, ecology, sports, city living, social inclusion implemented by civil and business organisations, community clubs, schools, universities, touristic associations and voluntary groups. The awarded initiatives are selected on the basis of results, importance for the local community, number and the involvement of the participants, impact of the initiative for the development of the capacity of the volunteers and the team of the organisation, financial effectiveness.

At the end of the ceremony, the participants applauded all the volunteers in Bulgaria who make the most generous gesture - they give their time and skills for the others.