Еchange of practices for Family Group Conferencing in Europe - closing conference and a working meeting of the partners from France, The UK, Germany and Bulgaria in Bordeaux
15.04.2019
-A A + 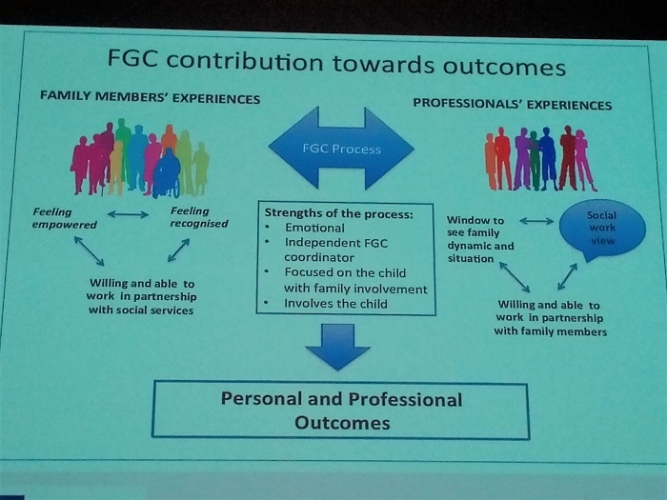 Closing conference in the frame of Programme for exchange of practices for Family Group Conferencing in Bordeaux, 11 - 12 April 2019

The closing conference was organised by the leading partner of the project Département de la Gironde. It took place in the Gironde building of the County Council of Gironde with the participation of some 250 specialists from the partner countries and mostly from France.  The conference was opened by Mr. Jean-Luc Gleyze, President of the County Council of Gironde. A presentation of the Erasmus+ project and of the experiment on FGC in Gironde by Nicole Ouvrard, Caroline Legrand and Clélia Phiquepal followed.

The aspects of the theoretical perspective and academic research on FGC was presented by Marie-Pierre Auger, doctoral student at University of Paris X – Nanterre, Prof. Mary Mitchell, Lecturer in social work, University of Edinburgh and Prof. Galina Markova, Director of the Know-How Centre for Alternative Childcare, New Bulgarian University.

As usual we invited colleagues from partner organisations in Bulgaria to join the meeting. Galina Markova from the Know-How Centre for Alternative Childcare at New Bulgarian University and Svetla Sivcheva and Nina Nikolova from Naia Association Targovishte and Sauchastie took part in the closing conference.

The blooming tulips were announced a symbol of the partnership of Gironde Departmental Council from France, Family Rights Group from the UK, NeuKolln von Berlin from Germany and Tulip Foundation from Bulgaria.

On the following day the partners had a working meeting to discuss the next steps and the preparation of the best practice guide. The “Exchange of practices for Family Group Conferencing in Europe” project is co-funded by the Erasmus+ programme of the EC.