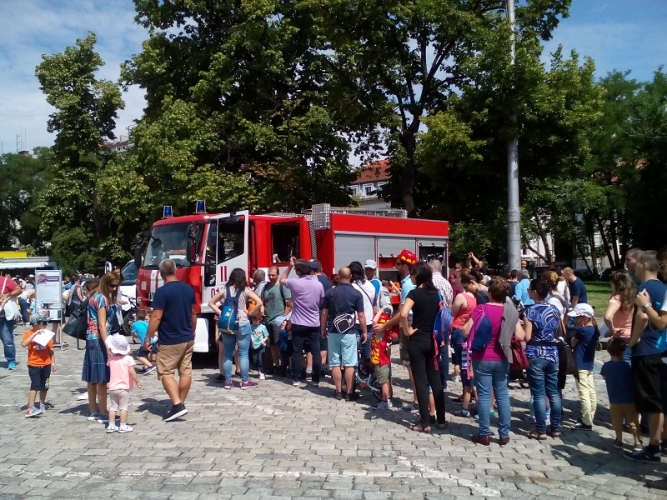 The opinion, the attitude and the involvement of fathers and other significant men in the daily life of children has a significant impact on their future.

We know that fathers and significant men from the family circle have a big role for the development and the future of children with their presence, their worlds, attitude and behavior. That’s why this year again we organised together with partners and supporters events and initiatives to mark the Father’s Day in the third Sunday of June.

The first event took place in front of the monument of Iordan Radichkov by the National Art Gallery on 15 June. In partnership with Sofia City Library we organised a literary reading to mark Father’s day. In the beginning the young student Nicolay read the short story “My Father” by Radichkov. After him prof. Mikhail Nedelchev, Marin Bodakov, Iordan Eftimov, Angel Igov and Ivan Hristov read their short poems and spoke with the children.

Hundreds of children with their fathers and mothers, grandfathers, older brothers and uncles gathered on Alexander Nevski Square, where they had the opportunity to explore various police and fire brigade cars and equipment and to fit the helmets.  In partnership with Sofia Municipality and with the generous cooperation of Sofia City Police and Sofia City Fire Brigade as a tradition we organised Father’s Day on the square. There were demonstrations of fire brigade cars, police vehicles, motors etc. Children from all ages and their fathers, big brothers and grandfathers and mothers also saw a police dog and spend time with police horses.  The alarms of the police motors and fire truck were laud and long explored by the children, who had friendly conversations with police and fire brigade officers. The latter shared that they have rarely seen so many fans at the same place.

Father’s day was also marked at the Cinema House. There were screenings of series of selected movies dedicated to fathers, men’s figures in the family, spiritual teachers, who being lost or found have always had path defining role for anyone of us.

The opinion, the attitude and the participation of fathers and men have a defining impact on their future. We know that regardless of cultural, religious and social differences more and more people realise the important role that fathers, grandfathers, uncles, big brothers – all significant male figure from the family circle play for the development of children. It is known that fathers (biological, adoptive and in any other father’s role) help children to have good friendships and performance at school; good self-esteem; relations with adults of full value; less problems with behaviour and risk of drug use and most importantly – to have a good self-confidence and future.