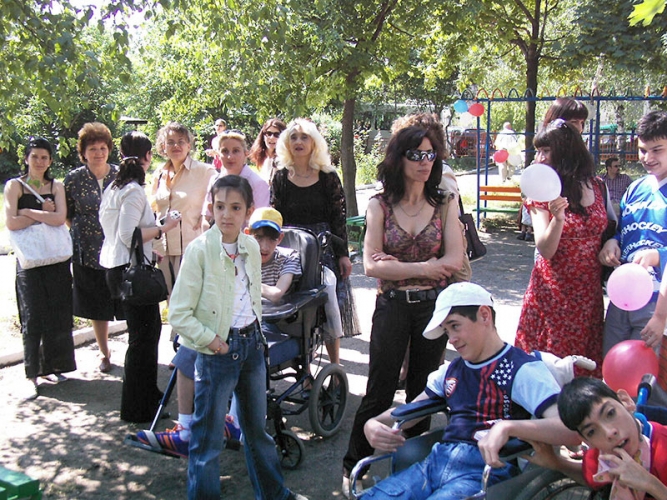 The project goal was to improve the conditions for social integration of children and young people with permanent disabilities; to encourage the development of their feelins of responsibility and usefulness; to provide them with labour therapy opportunities through the reconstruction and landscaping of the area around the Day Care Youth Centre open in Mladost neighbourhood, Sofia in May 2007. Such activities have proved positive effect on the physical condition of the children and the young people as well as on their emotional status. The gardening and art therapy classes provided good free time activities for the children and young people and their families that facilitate their socialisation.

The direct beneficiaries of the project are 15 young people with permanent physical and mental disabilities as their parents. The Day care youth centre is located in a former kindergarten in immediate proximity to the Social Services building and another playground. The improvements that have been made on the playground attract children and families from the neighbourhood, which contributes to the real integration of the direct beneficiaries.The place was cleared from rubbish and weeds. We replaced the wood on the metal frames of the sitting places and painted them in nice lively colours. We repaired and painted the fence. We moved out the useless and dangerous playing equipment, cut and shaped the bushes and the trees, cultivated the roses and the flowers, cut the grass and weeded the garden. We planted cypress bushes and colourful flowers which we decorated with rocks and cobbles painted in bright colours. We bought two proper benches, which we put at the entrance.

The young people with disabilities joined the art therapy classes with great enthusiasm. The pots and pottery, which they were provided with, were decorated with the help of an art therapist and the social pedagogists. Later pot plants and bushes were planted in them.

A garden party was organised as a final event of the three-year project aimed at opening of a Day Centre. Our children and young people with special needs have their place in the society and the community and they need to be accepted the way they are.