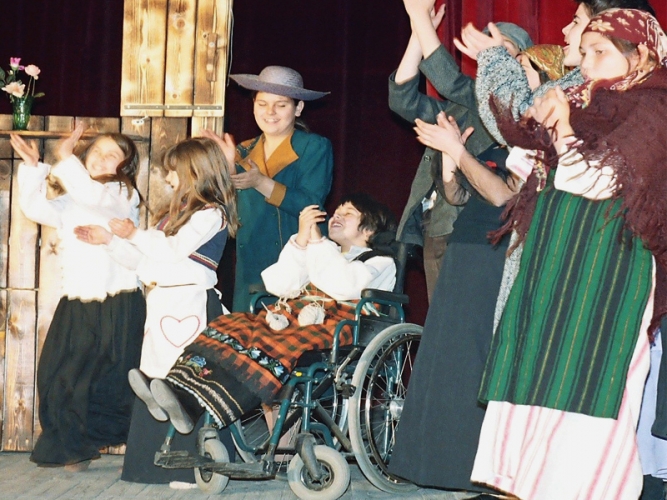 In 2002 the association organized a summer camp for children with disabilities and the children from the mainstream schools in Patalenitza and Pazardjik. For one week all children lived and worked together in various creative workshops. Thus in October the young artists performed with a big success their play “The step-mother of Snow-White” in Pazardjik and Plovdiv. The result was quite inspiring.

The project aimed at integration of children in disadvantaged position through theater started in the end of 2003. The leading role in the project was that of some 20 children from the first village Shakespearian theater school called Petrovden. It was founded in 1999 by the theater director Hristo Tzerovski. For some seven years the children learned and performed Shakespeare’s plays together with the students from Plovdiv University. The unique performances of Romeo and Juliet, Hamlet and others brought a numer public in the school yard in the village, turned into enormous stage at an open air, on the streets of the village and in the small twelve century church St. Dimitar. The old tradition of performing theater in the natural décor of the real world brings unforgettable excitement for the artists and the public.

In May 2004 the preparation of another Shakespearian play began – Midsummer Dream. In July the performance took place at the summer stage of the school in Patalenitza. The children from the center Faith, Hope, Love were our special guests.

In July 2005 the association continued its work for integration of children with disabilities and presented the seventh annual Shakespeare’s performance, Love's Labours Lost, repeating the model of integration through theater.