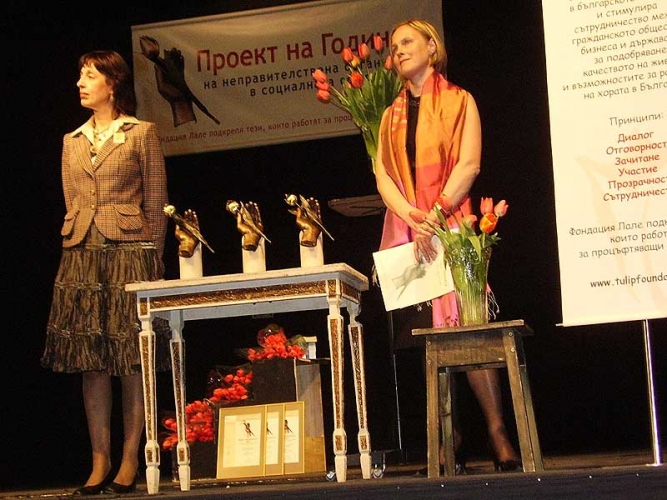 The Project of the Year 2005 Award for non-governmental organisations working in the social sphere were announced at a ceremony on 29 March 2006 in the Aula of the National Theatre and Cinema Arts Academy.

The Project of the Year 2005 was awarded to:

The Future Is in Our Hands – Together Again
Association Rhodopi Mountain – ХХІ Century, Village of Polkovnik Serafimovo

Apart from the Project of the Year award, a plastic made by Georgi Chapkunov, the organizations received a certificate and donation of 500 leva as additional funding to the awarded project.

Helping Yourself You Help Others
Regional Organization of the Disabled, Targovishte

Developing Skill for Independent Living of Young People with Disabilities
Association We Exists Too, Sofia

The award ceremony was attended by representatives of the distinguished, awarded, nominated and partner organizations as well as many guests, representatives of municipalities ministries. Willem van Ee, Ambassador of the Kingdom of the Netherlands in Bulgaria, addressed the guests of the ceremony. The guests had the pleasure to listen to the performace of the women from the folklore group at Chitalishte "Svetlina", village of Gorni Lozen.

The chair of the jury Mrs. Carmen Gonsalves, Deputy Head of Mission of the Embassy of the Kingdom of the Netherlands and its members Jan Willem Overwater, Country Manager ING Bulgaria, Ivo Prokopiev, Chair Economedia and Konstantin Tillev, Vice President, FM+ Radio presented the awarded projects. The awards were given away by Ronald van der Giessen, Derector of Oranie Founds, Mrs Ivanka Hristova, Deputy Minister of Labour and Social Policy and Mr Vladimiir Kission, Chhair of the Board of Tulip Foundation.

The project of the year competition for the best social NGO Project of the year for 2005 was announced by Tulip Foundation in October 2005. The initiative was provoked by the big number of good projects implemented in the last few years all over the country. Each of these projects had been made possible by the hard work of the people who invested a lot of their time and dedication for the success of the projects.

Civil organizations that have implemented a project aimed at improving the living conditions, possibilities and quality of life of certain groups or communities in disadvantaged position were welcome to participate in the competition. Projects implemented in towns, cities and villages were welcome regardless of the project budget, scale of operation, type of activity or beneficiaries.
The nominated project were evaluated on the basis of: achieved results, sustainability of the project activities, financial efficiency, participation of the target groups and the local communities, innovative services and the possibilities for implementing the project in other areas of the country. The best projects were selected by a jury.

By the end of January 61 nominations for the Project of the Year were received in the office of Tulip Foundation. The nominated projects cover a huge variety of social activities and are targeted at positive change towards providing more opportunities and better quality of life for certain groups or communities in disadvantaged position. From the nominated projects 30 are implemented in different cities and towns of the country, 12 are taking place in Sofia and 8 are realised by local organisations in villages. Apart from Sofia the other towns with more than one nominations are Samokov, Russe, Targovishte, Plovdiv, Bourgass, Varna and Haskovo.

The projects are nominated mainly by other local and national NGOs and partners; by the project team of the organization implementing the project and by the local authorities. There are nominations by participants in the projects, local businesses, professionals, volunteers and members of the community.

LATEST NEWS
2020-04-29
8 key actions to help families and the economy bounce back
2020-03-18
European Pillar of Social Rights
2020-02-24
Informational meeting for the organisations invited to present a full project proposal in the frame of Power of Family and Community Programme.
Subscribe to monthly bulletin
LAST BULLETIN
ARCHIVES
Support Us