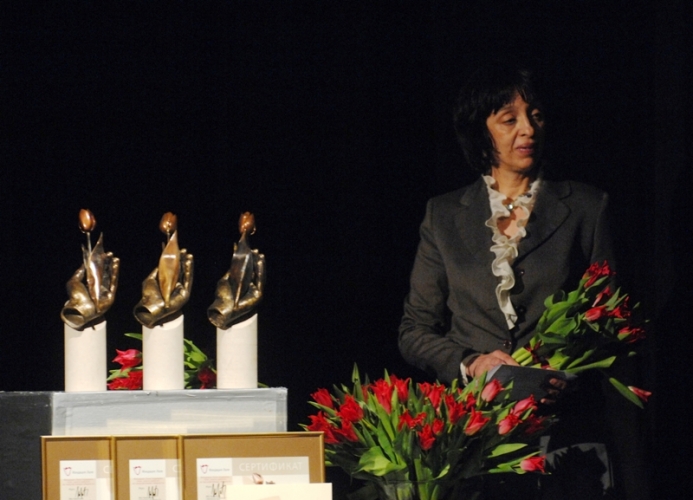 The 2008 Project of the Year awards for civil organizations working in the social sphere were announced at a public ceremony which took place on 30 March in the big hall of the National Academy for Theatre and Film Arts.

For the fourth time the theatre hall of the Academy attracted representatives of the civil organizations from all over the country, ministries, agencies, municipal authorities and businesses as well as many guests who came to express their recognition to the people who are socially responsible from their own communities.

The ceremony was opened by Ivo Prokopiev, Chair of Economedia and the Confederation of Employers and Industrialists in Bulgaria. He presented the work of the jury and the evaluation criteria applied top the nominated project – achieved results, sustainability of the project activities, financial efficiency, participation of the target groups and the local communities, innovation of the services and the possibilities for implementing the project in other areas of the country. Mr. Prokopiev presented the ten shortlisted projects among which the three awarded projects for 2008 were selected.

Mr Plamen Oresharski, Minister of Finance, was a special guest of the event. He addressed the participants in the competition and the guests of the ceremony and joined the members of the jury Nina Mircheva, Director of Corporative Communications, М-Теl, and Adela Peeva, film director, who presented the first awarded project - National Chess Tournament for People with Mental Difficulties. The project has been implemented by Chovekoljubie Association, Pazardjik. Minister Oresharski gave the award to Ms. Nadejda Kuzermanova, director of the Association and congratulated the participants in the chess tournament, who visit the Centre for Mental Health Chovekoljubie.

The project Together with care and love for overcoming loneliness and abandonment implemented by Association Solidary Society at the state institution for children without parents in Shumen was presented by Petia Tetevenska, member of the Managing Board of the Bulgarian National Television; Ben Cross, a British actor and Levon Hampartsumian, Chair of the Managing Board and CEO of UniCredit Bulbank.

The visibly moved members of the jury gave the award to the even more exited and bewildered by the attention elderly ladies and the members of the Association.

Addressing the guests of the ceremony, HE Willem van Ee, Ambassador of the Kingdom of the Netherlands in Bulgaria,spoke of social responsibility as the main value of the European community. Ani Zaharieva, Executive director of FairPlay International and Bernard Moscheni CEO of BTC announced the second awarded project – Open Door Social Enterprise – sustainability for the development of NGOs, implemented by Association Centre Open Door, Pleven.

At the end of the evening, Ronald van der Giessen, director of Foundation Oranje Fonds, who had come to Sofia especially for the Project of the Year Award ceremony, addressed the participants and the guests. Oranje Fonds is one of the leading grant giving organisations in the Netherlands. The organisation is named after the Royal Family and the Crown Prince Willem Alexander and Princess Maxima are patrons of the foundation. Long term fruitful partnership connects Tulip Foundation and Oranje Fonds.

The awarded projects received a 2008 Project of the Year plastic especially made for the occasion by Georgi Chapkunov as well as an accompanying certificate.

The awarded projects were selected among 27 projects implemented all over the country, which were praised by the people who nominated them. The projects were nominated by other civil organisations and partners; members of the project team; Social Assistance Directorates; mayor’s and municipal offices; volunteers and participants in the project activities; representatives of the media, local schools, academic institutions, parents and families of children and elderly people who had received support through the projects.

The competition was open to all civil organisations, which in 2008 had implemented a project aimed at improving the living conditions, possibilities and quality of life of certain groups or communities in disadvantaged position. Projects implemented in towns, cities and villages were welcome to take part regardless of the project budget, source of funding, scale of operation, type of activity or beneficiaries.

Following the tradition of the event, the best projects have been selected representatives of leading business and media organisations and prominent artists. This year the projects were evaluated by: Ivo Prokopiev, Chair Economedia Ltd. And Chair of the Confederation of Employers and Industrialists; Adela Peeva, film director; Ben Cross, British actor; Petya Tetevenska, Member of the Managing Board of the Bulgarian National Television; Willem van Ee, Ambassador of the Kingdom of the Netherlands in Bulgaria, Levon Hampartsumian, Chair of the Managing Board and CEO of UniCredit Bulbank; Ani Zaharieva, Executive Director of FairPlay International; Nina Mircheva, Director of Corporative Communications, М-Теl; Bernard Moscheni, CEO of BTC.

The ceremony was made possible with the support of the MATRA Programme of the Dutch Ministry of Foreign Affairs, the National Academy for Theatre and Film Arts, New Moment New Ideas Company and by the media partnership with the Bulgarian National Television, RE:TV, Radio Star FM and RFI; the Vagabond magazine, and the newspapers Capital and Dnevnik.