Three projects were awarded as best projects of NGOs in the annual competition
29.03.2018
-A A + 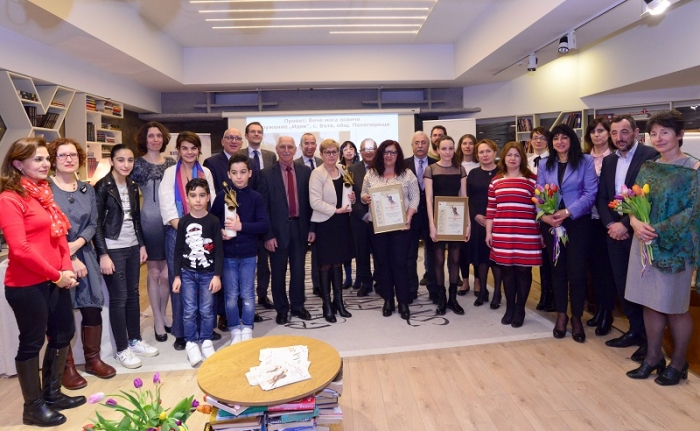 The public ceremony took place on 29 March 2018 at Peroto Literature Club at the National Palace of Culture.  Maria Petkova from Tulip Foundation opened the ceremony and presented the members of the Jury who are high profile professionals from business sector, media and diplomats. In the presence of representatives of organisations whose projects were nominated, partners, colleagues, friends and guests the members of the Jury announced the awarded projects.

Petya Kolcheva, Managing Partner at Novel Consult Law Firm, spoke about the live question of violence against women and the project Centre for social rehabilitation and integration of victims of domestic violence of Association Naia in Targovishte. Iravan Hira, Managing Director, Hewlett Packard Enterprise Bulgaria and Chair of Bulgarian Business Leaders Forum, continued the presentation and together they handled the award to the representatives of the association. Vladimir Kissiov, Chair of the Board of Tulip Foundation, underlined that it is important that Bulgaria ratifies the Council of Europe Convention for Prevention of and Fight against Violence against Women and domestic violence. He congratulated the team of the association.

Silva Zourleva, Member of the Board of Directors Nova Broadcasting Group, moved the audience with her talk about the sense and the significance of the project We are made of one and the same dough of The Bread House Sofia and the Council of Women Refugees in Bulgaria. Emmanuelle Polio from the Embassy of Italy greeted the audience on the name of Ambassador Stefano Baldi and spoke about empathy of societies in Europe and especially counties like Bulgaria and Italy for refugees. Vladimir Penkov from the Board of Tulip Foundation presented a letter for additional funding to the representatives of the two organisations.

Krassimira Chemishanska, General manager of Amgen Bulgaria and President of the American Chamber of Commerce in Bulgaria presented the project of a young and highly motivated team. Nikola Dobrev, CEO of KZM 2000 Group, continued the presentation and underlined that it is important to have legislation and international documents, but it is equally important that there are knowing and capable people on the spot who work with children, young people and the community. They announced the awarded project “You better don’t - A Campaign for prevention of sexual violence and exploitation among teenagers”. Levon Hampartzoumian, member of the Board of Tulip Foundation, spoke about the importance to work with young people and presented a grant letter to the team of Learn Foundation.

The awarded organisations received an award especially made by Georgi Capkanov, a certificate and additional grant from tulip Foundation. The ceremony was organised in partnership with the National Palace of Culture and with the media partnership of Capital weekly and the Information Portal of NGOs in Bulgaria.

Some of the members of Jury underlined the importance of the criteria for assessment as they make the selection objective but also difficult for the Jury. The criteria include results, sustainability of the project activities, financial efficiency, participation of the target groups and the local communities, innovative services and the possibilities for implementing the project in other areas of the country.  This year nineteen projects from around the country were nominated for Project of the Year competition. These are nominated by civil originations and partners, volunteers, parents, community clubs, and citizens who have participated in activities.

Tulip Foundation organised the competition for the best projects in Bulgaria for a thirteenth successive year. That is our answer to the numerous interesting and innovative projects, planned and implemented with care for the people in Bulgaria each year. Each of these projects is been made possible by active and searching people who have committed themselves to its successful implementation with responsibility and professionalism. Civil organisations that have been implementing projects aimed at improving the living conditions, opportunities and quality of life of groups or communities in disadvantaged position have been invited to participate in the competition. Projects implemented in towns, cities and villages were welcome regardless of the project budget, source of funding, scale of operation, type of activity or beneficiaries.

The awards in the media:

Project of the Year 2017 Awards

Project of the Year 2017 - Nominations

LATEST NEWS
2020-08-07
Preliminary working meeting in the frame of The Power of Family and Community Programme for introducing the principles, the standards and the way the Sure Start Programme works took place in Kazanluk.
2020-07-10
The members of the Jury announced the Project of the Year 2019 awards at a public ceremony at Peroto literature Club at The national Palace of Culture on 8 July 2020
2020-07-03
The closing conference in the frame of the project Empowerment of Roma Women for Roma Children Education took place in Haskovo on 29 June
Subscribe to monthly bulletin
LAST BULLETIN
ARCHIVES
Support Us