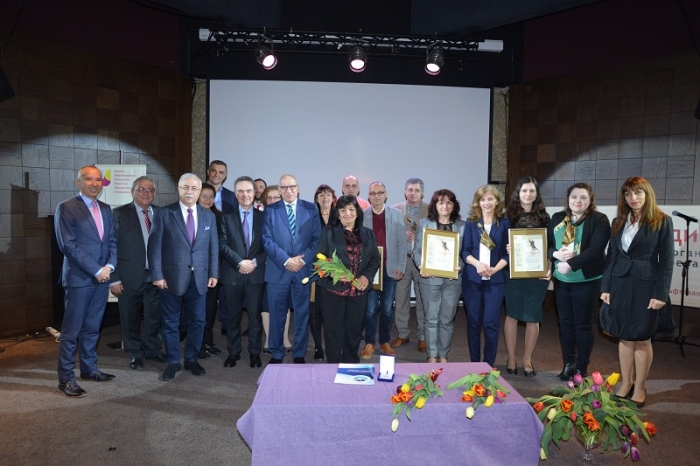 The public ceremony for the awards took place in the first week of spring. On the World Theater Day Maria Petkova, director of Tulip Foundation opened the event by speaking about the theater on the stage and theater life, which we all play every day. Theater brings us together and moves us, makes us worry and laugh. Sometimes it is a drama or a tragedy, other days it is a comedy. There are always various roles and situations. But we not always think of what happens before the performance, behind the stage – the hard work, the pressure, the small joys, the failures and the triumph of the actors in the theater and in life, for their professionalism.

Project of the Year awards are recognition for the good professionals in the civil organisations. As a tradition the awards were announced by the members of the Jury - leading professionals from business, media and diplomats.

Iravan Hira, Managing Director, Hewlett Packard Enterprise Bulgaria and Chair of Bulgarian Business Leaders Forum, presented the project „Care in early age” of For Our Children Foundation. Vanya Kaneva received the award and expressed gratitude towards partners and participants in the project activities.

Alexander Dimitrov, Chair of the Board and CEO of A1, told about a project for children and young people in the village of Balvan - Centre for prevention and sport run by Charity Association Sv. Ivan Rislki. Together with Anna Zaharieva, member of the Board of Tulip Foundation, he handled the award to Veselina Ivanova, deputy chair of the Charity Association and Rositsa Dimitrova from the Municipality of Veliko Tarnovo.

Petya Kolcheva, Managing Partner at Novel Consult Law Firm, was really moved when speaking about the project “Support for parenting” implemented by Sauchastie Association in Varna. HE Stefano Baldi, Ambassador of Italy, told more about the role of civil organisations. Ilian Rizov and Leilia Husein shared how important the recognition and the encougement are for them and their colleagues.

At the end of the evening the Deputy Chair of the State Agency for Child Protection Mariela Licheva presented the official token of the Agency to Vladimir Kissiov, Chair of the Board of Tulip Foundation, as an appreciation for the activities of the Foundation.

Together with the ever blooming tulips, especially made by the prominent Bulgarian sculptor Georgi Capkunov, the awarded organisations received a certificate and an incentive grant from Tulip Foundation.

The ceremony was organised with the media partnership of Capital and the Information Portal of Nongovernmental Organizations (NGOs) in Bulgaria and the support of the National Palace of Culture.

Tulip Foundation organised the competition for the best projects of the year for a fourteenth successive year as an answer to the effective and innovative projects implemented with care for the people in Bulgaria.