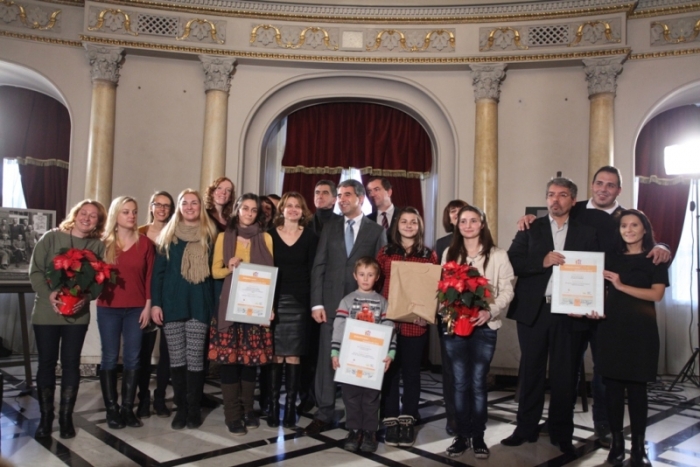 Maria Petkova, Director of Tulip Foundation, opened the ceremony by greeted the numerous volunteers, representations of various organisations, media and guests and spoke about the role of thousands of volunteers in Bulgaria.

The President of the Republic of Bulgaria Rosen Plevneliev congratulated the volunteers in Bulgaria and underlined the significance of their work for all of us because they do not only help individual people, but they bring hope and change to our society.

Reneta Veneva, Chair of the Board of the National Alliance for Voluntary Action, presented the members of the jury and the criteria that they applied to select the awarded initiatives. The young musicians Magdalena Vutuva and Josef Shukerov respectively students of Julia Angelova and Stolina Dobreva at the National Musical School Lubomir Pipkov presented their musical greetings to the public playing musical pieces for violin and guitar by Ysaÿe Isai and Duplessy.

The members of the Jury - the volunteers who selected the best and most interesting initiatives for the year 2014 announced the awards. This year the members were Aneta Milkova, member of the Board of the Bulgarian National Television; Ognian Zlatev, Head of Representation of the European Commission in Bulgaria; Aleksey Lazarov, Chef Editor of Capital; Ivan Stancioff, founder and Chair of the Board of Karin Dom Foundation and Boyko Stankushev, journalist at the Bulgarian National Television.

Aneta Milkova and Aleksey Lazarov presented „Volunteer Project at Integration Centre at State Agency for Refugees in Sofia” run by Caritas Sofia and CVS Bulgaria. The volunteers work with children, youth and adults seeking protection to help them to adapt easier to the Bulgarian society. They help children who attend school with their lessons and homework, organise art workshops, music lessons, and computer courses. Some 200 volunteers with different experience and profession have been involved united by their will to act and to contribute the best they can.

Boyko Stankushev told about a project “Let’s Build a Home, Let’s Give Hope!” implemented by Habitat Bulgaria. It is an initiative for building four homes for families with young children and urgent housing needs in Kostinbrod during the period 2013 - 2014. The focus is on the need of effective partnerships among state structures, business and civil organisations for ensuring dignified and safe housing for all. As a result of a partnership four families of five members have received the chance to live in their own homes and to raise their children in a healthy and safe environment.

Ognian Zlatev congratulated the youngest awarded participants and presented the certificate to the children from Centre for Volunteers at St. Paisii Hilendarski School in Haskovo and their teachers. With their initiative “Lets Help the Children of the Refugees!” they have supported some 200 refugee children at the refugee camp in Harmanly with hygienic and cleaning materials. The students have organised an informational campaign, collection and packing of donations, transport of all donations with the help of their parents. Some 20 volunteers and more than 650 students and parents have supported the campaign.

At the end of the ceremony all participants applauded the thousands of spontaneous and organised volunteers in Bulgaria who were the first to react to the needs of people and to get involved in tens of actions to support thousands of families badly affected by the floods in various parts of the country during the year.

The ceremony Volunteer Initiative 2014 was organized with the support of the National Theater Ivan Vazov and the media partnership of the Bulgarian National Television and Capital.

The competition Volunteer Initiative 2014 was organised by Tulip Foundation and National Alliance for Voluntary Action for a fourth successive year with the aim to demonstrate to the society the good initiatives realised during the year and to give public recognition to the thousands volunteers in Bulgaria. It was announced in April 2014 and was opened for organisations and groups realising voluntary initiatives during the current year regardless the place and the period of the initiative, the aim and organisation of the actions, the sources of funding, the number and age of the volunteers.

This year a total of 66 interesting initiatives from around the country were nominated. The presented initiatives are realized by local volunteers in 36 settlements. The activities are organised by civil organisations, informal groups, business companies, community clubs, local schools and individuals.