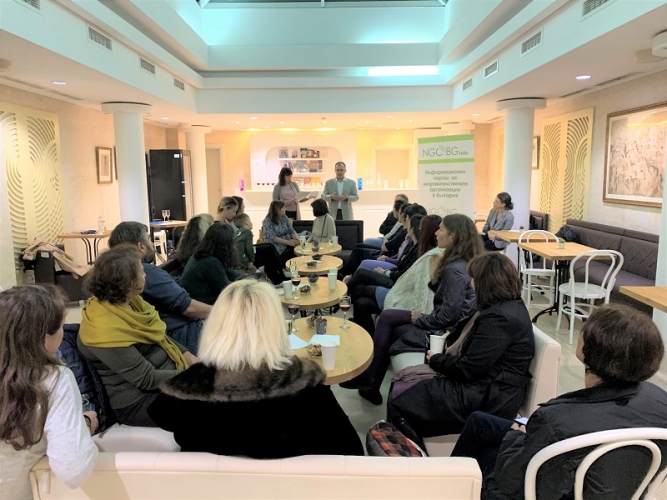 Why is my organisation important for people? Awards

The competition for best essays on the theme “Why is my organisation important for people?” was organised in partnership with the Bulgarian NGO’s Information Portal for a fifth year. Communication is the most important art in the contemporary world. The idea to present publically the activities of an organisation is to stimulate non-governmental organisations to use simple and understandable language when telling their stories to the people they work with and for, media, donors and volunteers.

This year 21 organisations presented short stories about their work. In line with the concept of the competition – to avoid professional jargon, special terms and foreign words, the selection was made based on three criteria: human language of writing; clear and easy to understand presentation of the organisation and its importance for the people and interesting and moving narrative. The best essays were selected by Victoria Blajeva, Head of Department Public Relations and Corporate Communications at UniCredit Bulbank; Marin Bodakov, a poet, a lecturer at Sofia University St. Kliment Ohridski and an editor at K newspaper and Stefan Komandarev, film producer.

Victoria Blajeva shared her impression that the texts become better each next year and added that „a good text moves makes cry and laugh, especially when it is about a concrete story or a person. Story telling is a hit in the corporate world. You should tell your stories, as they are amazing”. She also reminded a few technical advices for writing emotional essays and suggested that civil organisations could think of using also other forms of public presentation.

Stefan Komandarev told about his experience with the texts. „They are easy to read, written in a human language, with plenty of emotions. My biggest congratulation is for that. I read them all in one night. Some made me cry, others brought a smile to my face, there were also sad moments. To be able to provoke laugh and sorrow in one text – that is a high level mastering. I am a medical doctor and have worked as a child’s psychiatrist for 5 years. I say this in connection with the essay I will read in a while. It is about working with children patients – that is very difficult and responsible. I was impressed that they speak about eyes of children and light in them. I am also a producer and the best ward for me is the light in the eyes of people at the end of the screening. No awards, statuettes, diplomas, could possibly compare with that”. He announced the award and read „The funny hospital of Dr. Kuku and Dr. Pipi“ by Yanita Kirova from Metamorphosis Association.

Marin Bodakov shared that he has been on the jury for a few years. „In the beginning there were hard to navigate through texts regardless the fanatic caused behind them”. He continued with the theme about trust in communication. He read the texts „Is this OK?“ by Nadya Zdravkova from Loveguide and underlined that the essay explains in a simple language issues that are difficult to be told and many parents avoid. The text answers often-awkward questions about sexuality – unconformable for those who ask and those who answer.

The two awards ad equal and include a certificate and a check for 500 BGN. The award ceremony took place on 19 November as a meeting and conversation with the members of the jury and people from civil organisations at Retro Coffee at Regional History Museum - Sofia.