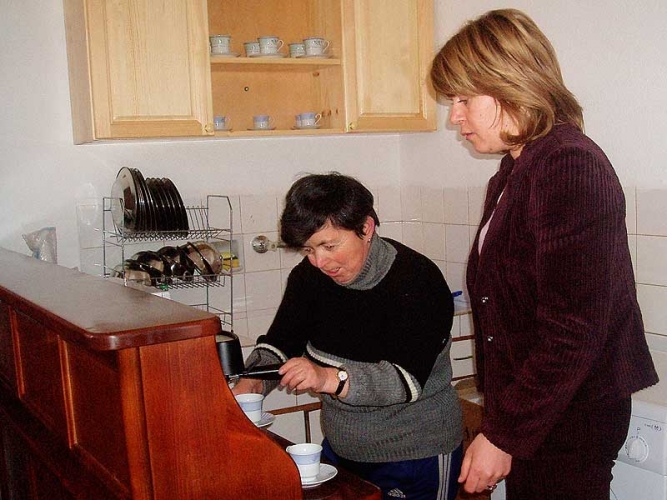 If you are open minded, accept people with disabilities, fight for their rights and are engaged with the idea of developing their potential without being ashamed to be called their friend then you share the values of Chance Association. The association supports the right of people with mental disabilities to dignified life through access to quality services, developing education and suitable employment.

In December 2004 the association started the implementation of a project aimed at providing protected housing. The main goal was to take people with mental difficulties out of the social institutions in the villages of Razdol and Petrovo and to prevent the institutionalization of people with families by offering a new form of social service.

The project implementation started with the purchase of a house in the center of Razlog, near the day center for people with mental disabilities run by the association. Training was organized for the team that was going to work in the protected house. The aim of the training was to equip the staff with the right attitudes, skills and knowledge for working with people with mental disabilities. 23 representatives of NGOs from all over the country attended the training as well. A manual for delivering the social service Protected Housing was published. The manual as well as the experience of implementing the project were shared with other NGOs through the network of the Bulgarian Association of People with Mental Disabilities.

In July 2005 the first protected house in the southern part of the country opened its doors. It is managed by Chance Association. At the moment there are 4 women living in it aged between 24 and 42 and two men aged between 22 and 26. They have all lived in social institutions prior to their arrival at the protected house. They spend the mornings at the day center then prepare their lunch, do their shopping and cleaning or go out for a walk. They are free to spend their evenings according to their preferences – some invite friends in, others watch television or write letters. The team consists of the following specialists: social worker, two therapists as well as a psychologist and social worker who also work in the day center.