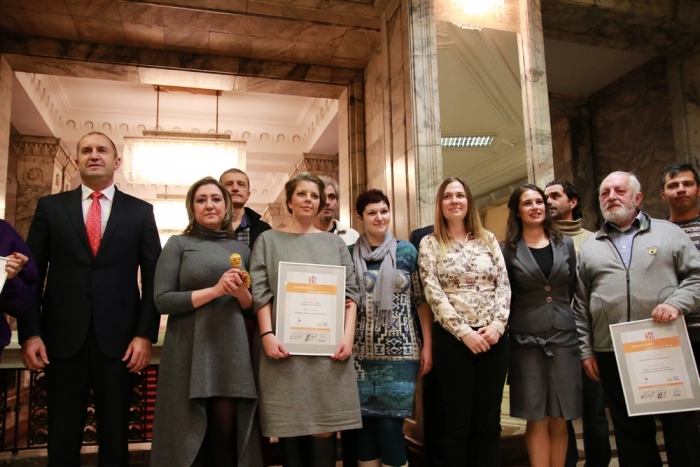 The annual Voluntary Initiative Awards 2018 were announced at a public ceremony in the presence of the President of the Republic of Bulgaria, volunteers and guests.

At a special ceremony on the International volunteers Day 5 December at the Presidency of Republic of Bulgaria the annual awards in the frame of the eighth national competition were announced. It was organised by Tulip Foundation and National Alliance for Voluntary Action.

This year some 58 various initiatives were nominated. These are implemented by NGOs, schools, kindergartens, libraries and community clubs, non-formal groups in cities and villages all around the country.

„The success is not always doing something for self but rather it is measured with what you have done for others. In times of crisis and division the volunteers unite people around important societal causes with their example. That’s why this initiative is precious” stated President Rumen Radev addressing the volunteers of civil organisations, schools, kindergartens, libraries, community clubs and non-formal group as well as the guests at the ceremony.

The selection of the best and most effective initiatives was in the hands of a Jury with members Ognian Zlatev, Head of Representative Office of European Commission in Bulgaria, Krasimira Velichkova, director of Bulgarian Donor’s Forum and Alexey Lazarov, Chief Editor of Capital newspaper. The presented initiatives were evaluated on the basis of their results, the importance for the local community, the number and the involvement of the participants, the impact of the initiative for the development of the capacity of the volunteers and the team of the organisation, the financial effectiveness. As each year there were three equal awards announced.

The initiative „Let’s save the chestnut trees“of the Organisation of the Bulgarian Scouts was awarded for the action of some 200 volunteers mostly children  and youngsters to protect the infected chestnut trees in Varna, Shumen and Ruse using bio methods.

The initiative „Let’s knit and sew for the premature born babies” of Our Premature Born Babies Foundation received an award for the work of some 900 volunteers who made special covers for the neonatal wards so to protect the vision of the babies from strong lights in the hospitals. There are 11 maternity hospitals equipped with the handmade covers.

Mountains and People Association - Association of mountain guides in Bulgaria received an award for the Renovation of The Horse Hut in Pirin. The volunteers have raised funds, plan the project for renovation, transport the materials to the place in the high part of the mountain. The renovation has taken 2 years and some 220 members of the association volunteered their work. The donors are more than three hundred.

The young musicians from the Youth Guitar Orchestra greeted the participants.